This August we celebrated 60 years since the first ascent on Ichinskaya Sopka volcano.
How many people ascended this volcano since then? We don’t know exactly, but anyway they were just few dozens. But we know for sure how many skied this volcano from the summit. One. This man is Fedor Farberov, Russian mountain guide and pioneer of ski-mountaineering in Kamchatka peninsula. He skied this volcano once, in 1992.
Just one person done it, and nobody even try. Why? There are many reasons why it has happened just once, but now, I probably know the answer. And this story is about how I got it.

What’s internet telling us about this mount?
Ichinsky (Russian: Ичинский or Ичинская сопка, Ichinskaya sopka) is a large stratovolcano located in the central part of Kamchatka Peninsula, Russia.  At 3,607 metres (11,834 ft), it is the highest peak of the Sredinny Range, the central range of the peninsula. Ichinsky is also among the largest volcanoes in Kamchatka, with a volume of about 450 cubic kilometres (110 cu mi).
The volcano is capped by a 3-by-5-kilometre (2 by 3 mi) summit caldera, within which rise two lava domes which are the highest peaks. The entire summit area is covered by a substantial ice cap, and several large glaciers descend the flanks of the cone. There is ongoing fumarolic activity within the caldera. By my local knowledge, I would add that place is cold (up to minus 45 deg C. in winter time) and very windy cause of its exposure to winds from all directions.
In 50 kilometers from volcano there is a nickel mine, Shanuch. Thanks to the road built to this mine, we can come closer to volcano, with just (!) 2-3 days of approach by foot or skis.

In my last story I told you that me and my guest, French snowboarder Laurent Cazeaux where planning to visit Sredinny range after our trip in Ganalsky range. So now you have an idea what was our goal. Yes, we were going to ski Ichinsky volcano.

What is the best time to ski such a big volcano in Kamchatka? Second part of May or even June, when it is getting warm, and sun is strong enough to melt the firn on the  top of volcanoes and stick the snow to the glacier ice. But what is the best time to approach these volcanoes, as soon as in many places you start from nearly sea level, and there is no snow in May? Definitely, April. Hmm, this puzzle does not look easy.
So, there are two opportunities – “easy” approach in April and firn/ice skiing or not easy approach and probably some corn skiing.  I’ve spent many years skiing Kamchatka volcanoes, and my experience told me, that we might be able to outwit the nature. Which means approach a bit later than April and skiing a bit earlier than end of May. 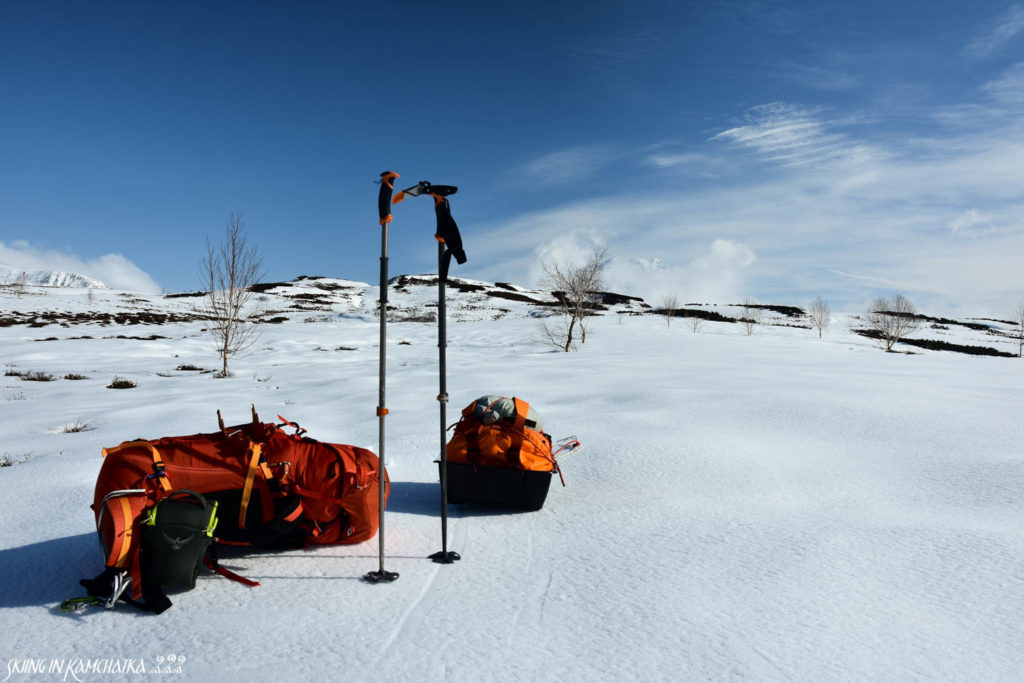 We started from sleeping Petropavlovsk 6th of May and headed to the north. In 4 hours we arrived to a small village Milkovo, the agricultural capital of Kamchatka. After quick lunch in relict cafeteria which has not really changed from Soviet Union times, we turned on the private mining road (yep, you need a permit to drive on) and headed deep in Sredinny range. It took more time than we thought, and we arrived on the spot only around 4 PM. We loaded out sledge (pulk/sled) and were going to skin about 3-4 kilometres on flat and set up a camp for the first overnight.

Now I need to tell you about the local snowpack feature. Sredinny range is a place with continental/ subarctic climate. It means very fable precipitations during winter, low temps, many sunny days. And obviously, close to the end of winter (i.e. May in Kamchatka) there is a first-class depth hoar from top to bottom. Amazing “sugary” snow laying on very bumpy tundra, with bumps are up to 1 meter high.
There is a period when old snowpack becomes  isothermal (wet and warm). There is still lot of snow, but it looks like a mix for thermometer calibrating, i.e. sluffy, sticky and with temps around 0 Celsius.  And, thanks to unusually warm weather in last 4-5 days, we have got this period right on the approach. Lucky guys!
Skinning in these conditions looks like you come to constructing site and decide to walk in falsework full of a bit liquid concrete (don’t do it in real life!). I don’t think that I need to explain it in details, it is too much pain for my mind. The most amazing thing in this situation is your sledge, sinking down, getting full of this “concrete” snow and sticky. So sticky, that you need to take a run to move it.
It was slowest motion period in my life. We have skinned 900 meters in one hour. Probably, we even did not need to skin this one hour, and it was a good lesson. So, we set up a camp, had a delicious dinner and went to sleep with idea to wake up early and see what’s the snow like after the night.
I believed, it could not be so bad, and woke up at 5 AM, jumped out of tent and enjoyed the good freeze crust on the surface. It was not super solid, but good enough for skis and sledge. 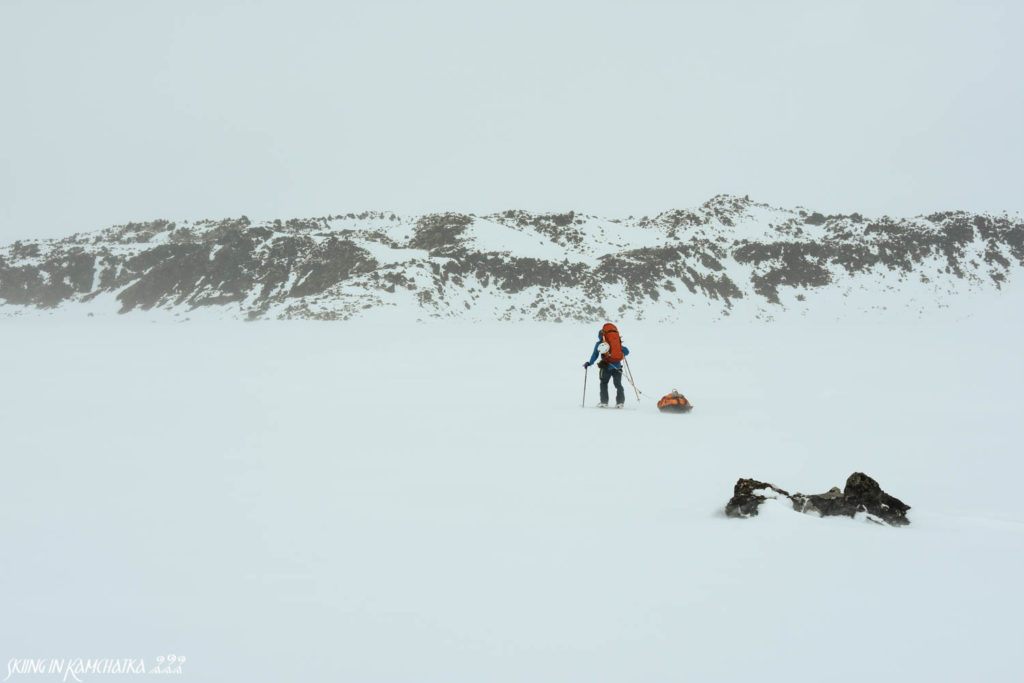 Even if snow was generally OK, that day was not easy. Lots of skinning up and down on pretty broken terrain with a strong head wind. We came to plateau with Ketachan lake close to 5 PM, spent another hour fighting with the wind and reached our destination for this day. There are 2 old and partially destroyed barracks near the lake. We shoveled for 20 minutes, cleaned up one of them, set up tents inside, had a quick dinner and fall asleep under accompaniment of wind.

Next morning was cold, calm and beautiful. Enjoyed nice morning view and started towards our mount. 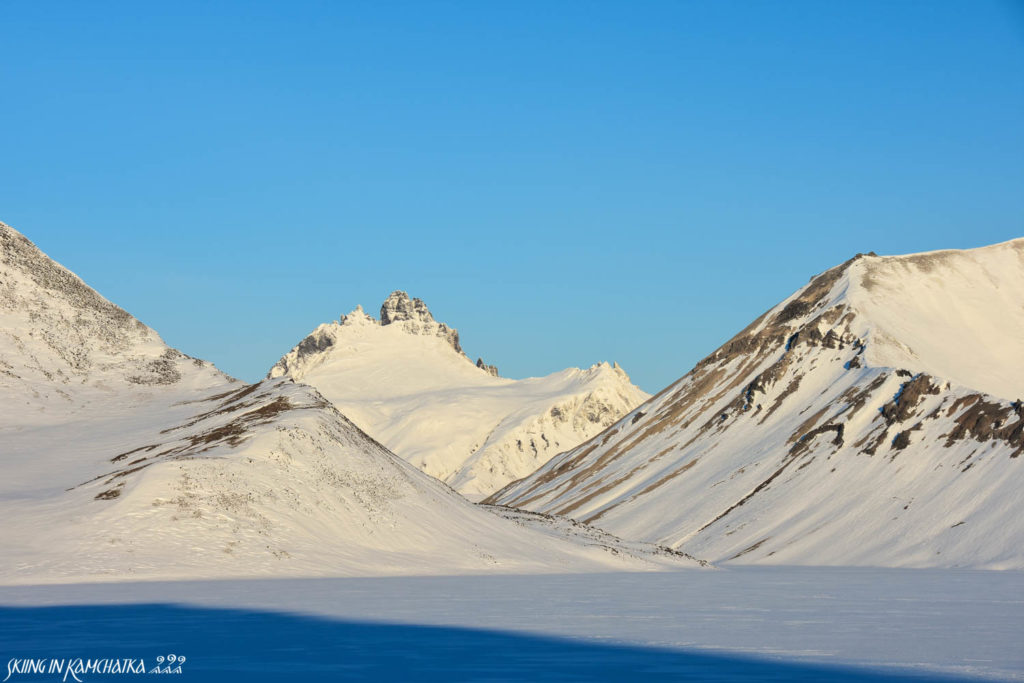 I don’t think that need to explain that day in details. We had pretty nice skinning with amazing scenery. At the same time we had a freaking strong wind, scrambling of steep hard slopes with the heavy sledge, navigation on tricky terrain with significant avalanche danger, and all this stuff which makes your backcountry days just unforgettable. 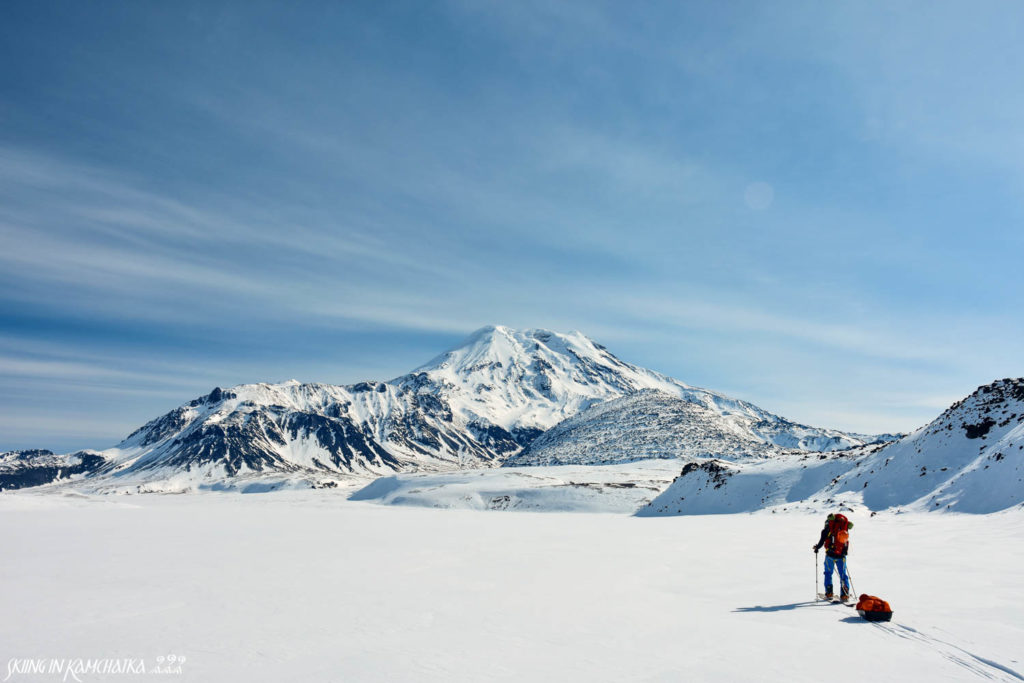 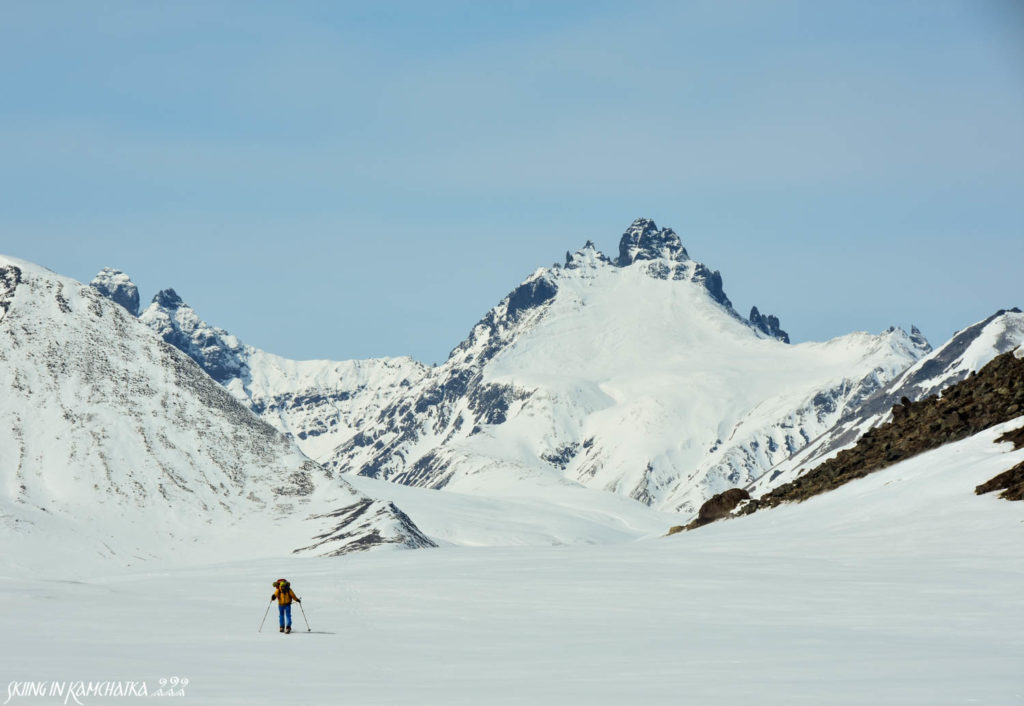 Close to the camping place we’ve found a bear’s playground, where mother bear and two or three cubs spent a day, and left hundreds tracks. It could be not the best news for us, but tracks were about 5-7 days old and we could ignore it. We set up a tents on 1300 meters, had a dinner and fall asleep.

Night was very windy, we did not sleep really well, or even did not sleep at all. Early morning wind has gone and we got a chance to have a rest. This day we had a short hike towards on slopes of volcano, to check the way up and general conditions. It was not so bad, we skinned up for couple hours, had a nice ride and decided to make an attempt on the next day. 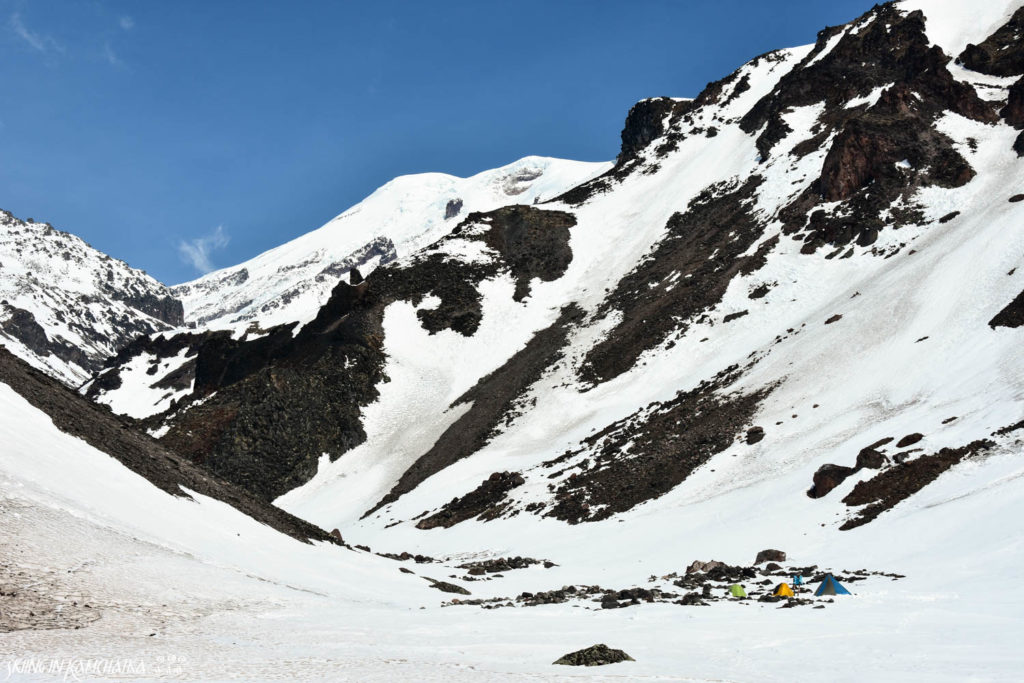 Early morning of May 10th. We started around 3 AM and despite the strong wind (sounds like a windy place, isn’t it?) we reached a 3100 meters at early noon. It was just another 400 meters to the summit, but we had to turn back cause of sickness of my guest. Sometimes, humans are getting sick in the mountain environment, we just have to accept it.
In the camp, after the short discussion we decided to spend one day for the rest and make another attempt. In this case we had no time for other skiing objects in the area, but Ichinsky was the main goal, and we should use all chances. 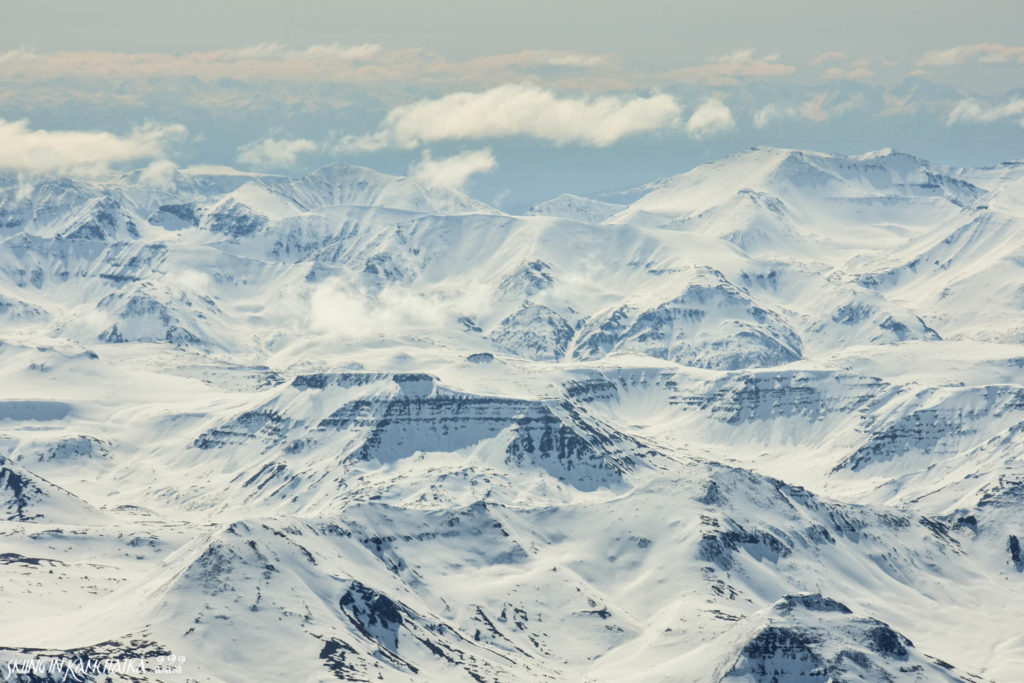 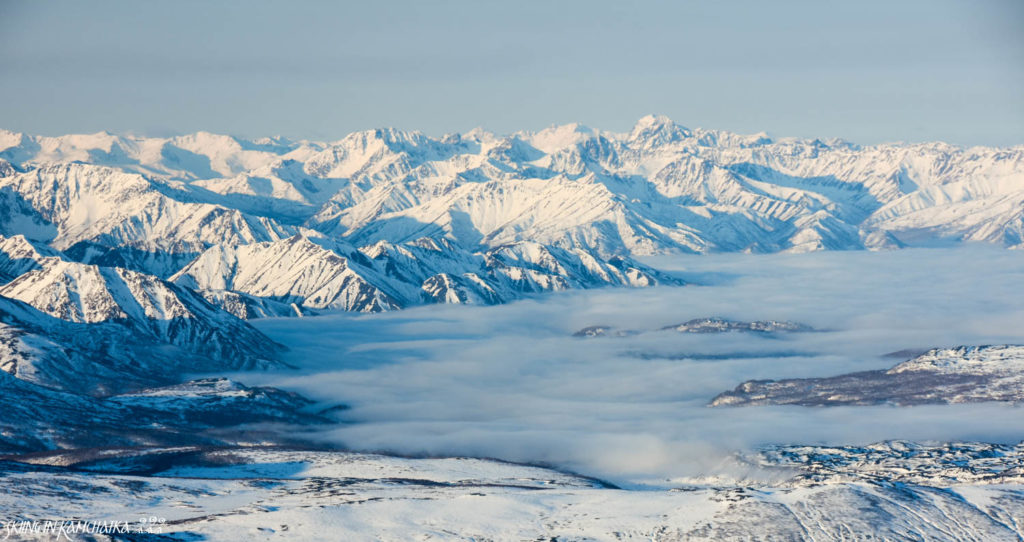 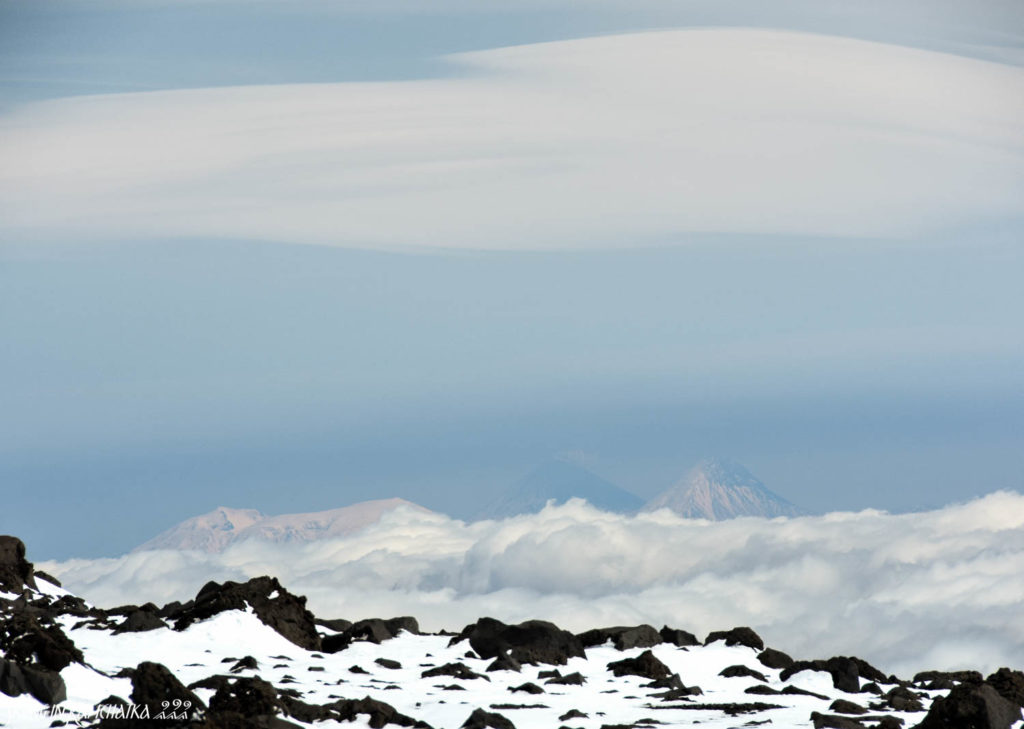 Day off flew away as one hour, and again, 3 AM, head lamp spotlight the tips of skis, sky behind you getting from black to violet, first sunlight’s touching the mountains and you are just happy to be here and see it. 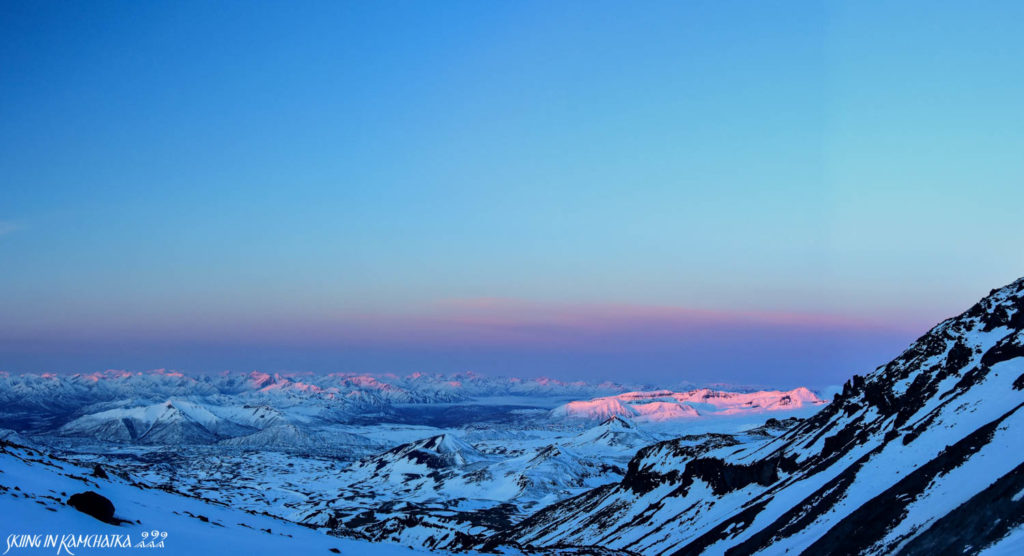 Around the noon we crossed a bergschrund on 3200 meters, before the upper part of summit, and started climbing. It was long and steep slope, actually the glacier covered with firn snow, with some ice lenses. We did about eight 30-meters pitches, and in 2.5 hours of climbing came to 3500, and took the less steep route to the summit. Even with altitude sickness* we reached the top in 30-40 minutes, and should be admired of panoramic view. Alas! The haze from warm air masses has not left a chance to see any, except the slopes of volcano. But anyway, we were on the summit and it was time to shake hands and congratulate each other.

*Due to the climate specific in Kamchatka, you start to feel altitude sickness already on 3000 meters with the same symptoms like in Alps on 4000 meters approximately. 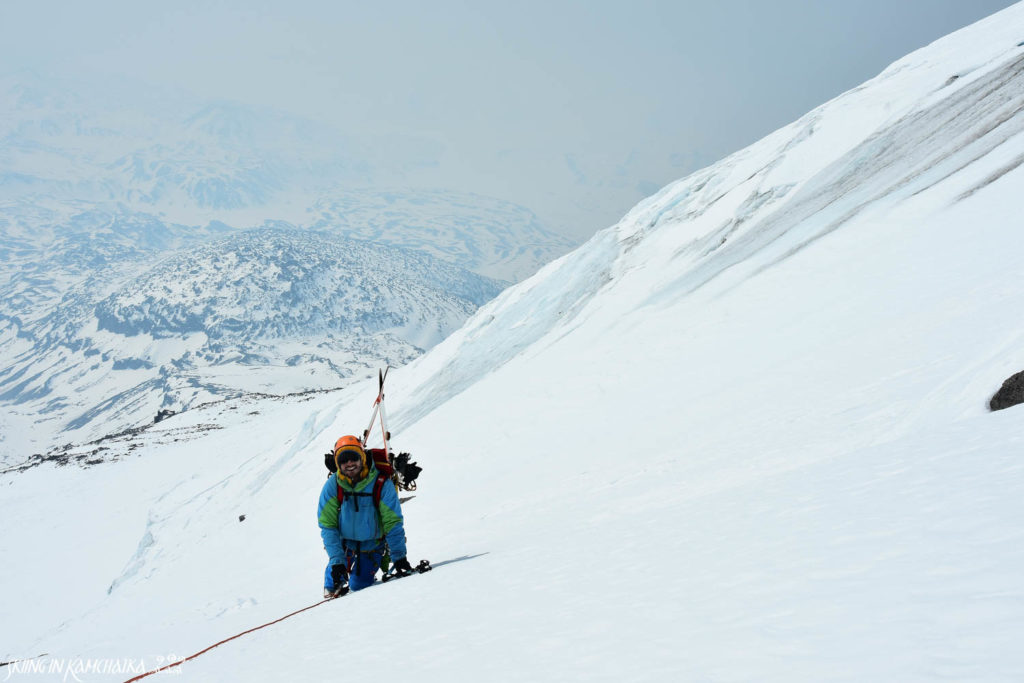 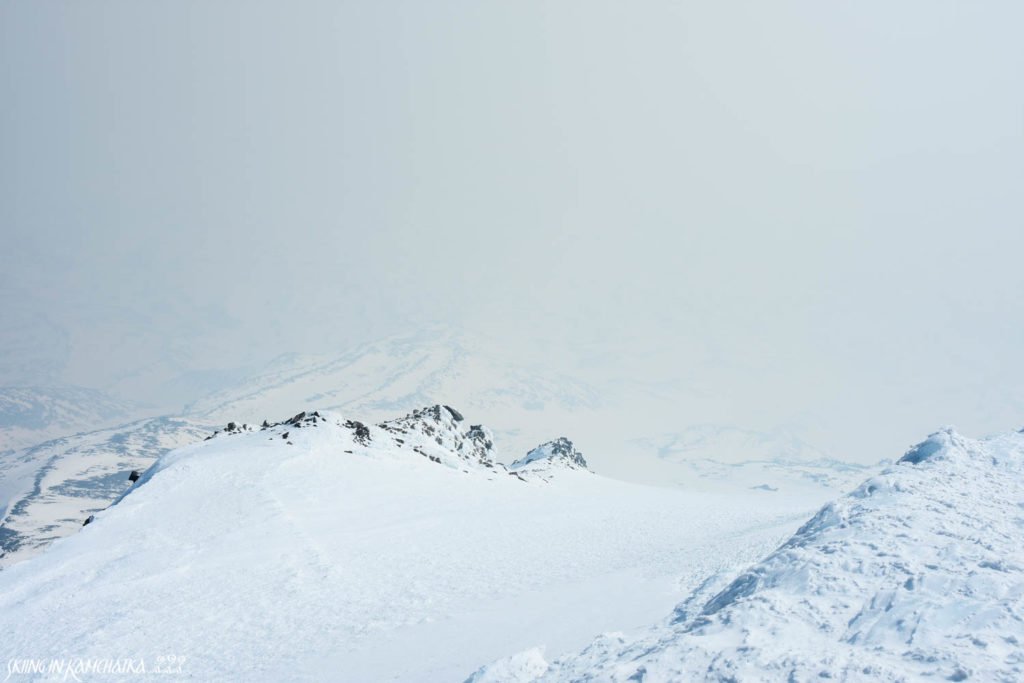 When I told Laurent that we were going to ski, he decided that I went nut, because to ski the slope which we used for ascent would be a pretty bad idea. But I had a plan. Close to the rocky ridge on the upper part I’ve noticed a snow strip, which had a bit another colour and structure than the rest of the slope. Basing on my local knowledge and experience, it looked like a skiable snow. We discussed this idea and decided to try. We prepared to change the plan and rappel instead of skiing if necessary, and started. First part was not very steep but very sleepery, because of tiny ice particles on the surface. We carefully came to the steep part near the rock, I made few first turns and … YES! It was enough melted to have a good and safe skiing. In few minutes we skied this slope, carefully traversed to bergschrund, crossed it and came to the less steep slopes with some good corn snow.  We were pretty tired, and took it easy to the very end, with few photo-sessions on a way. 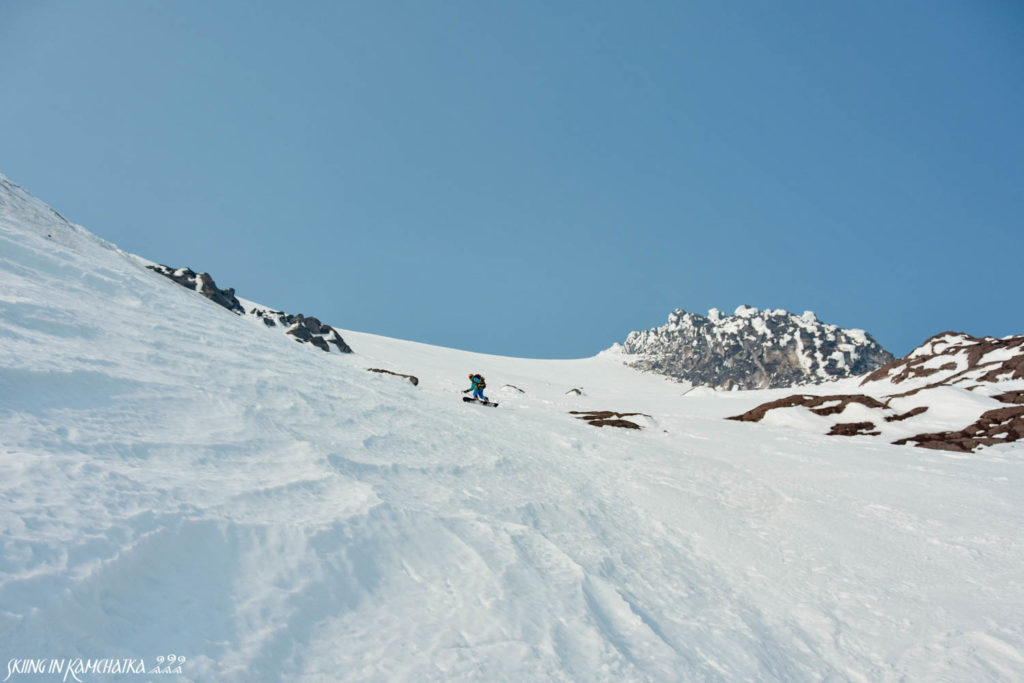 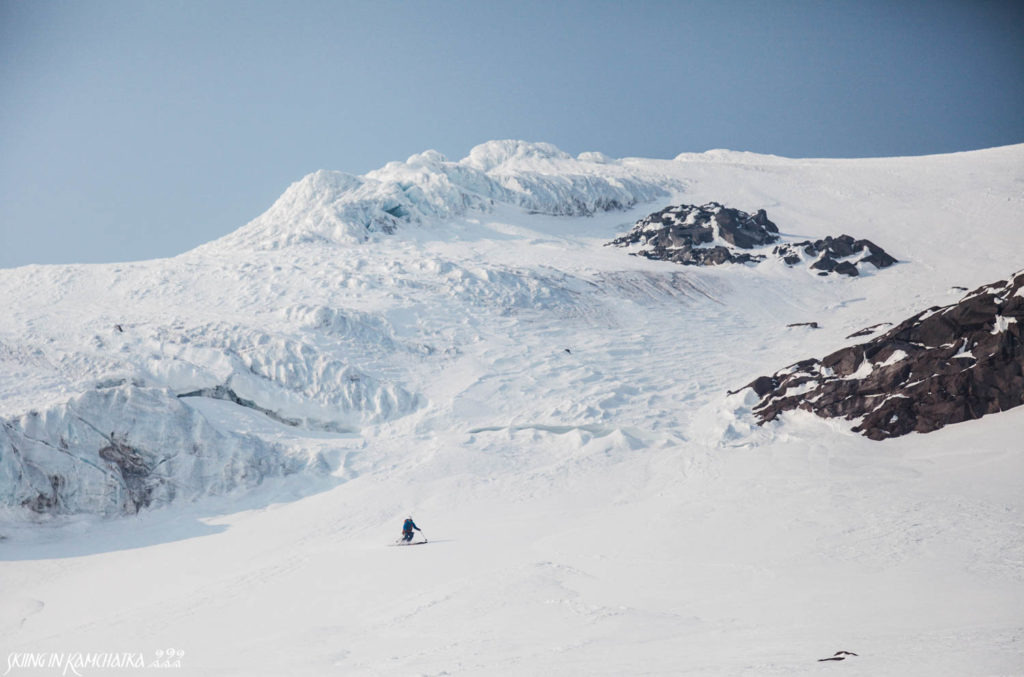 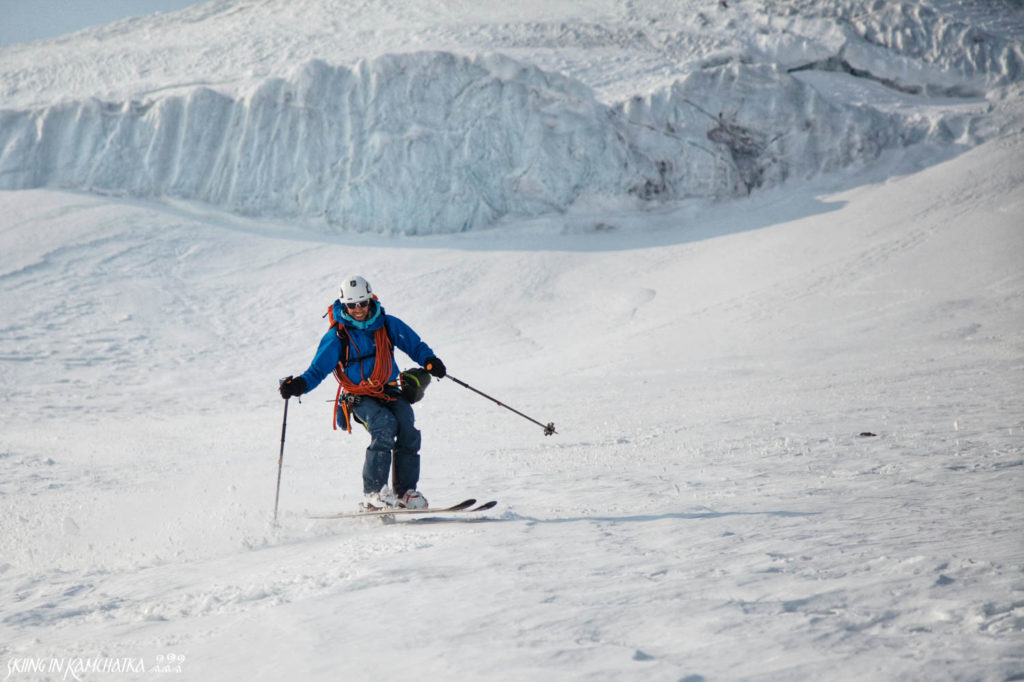 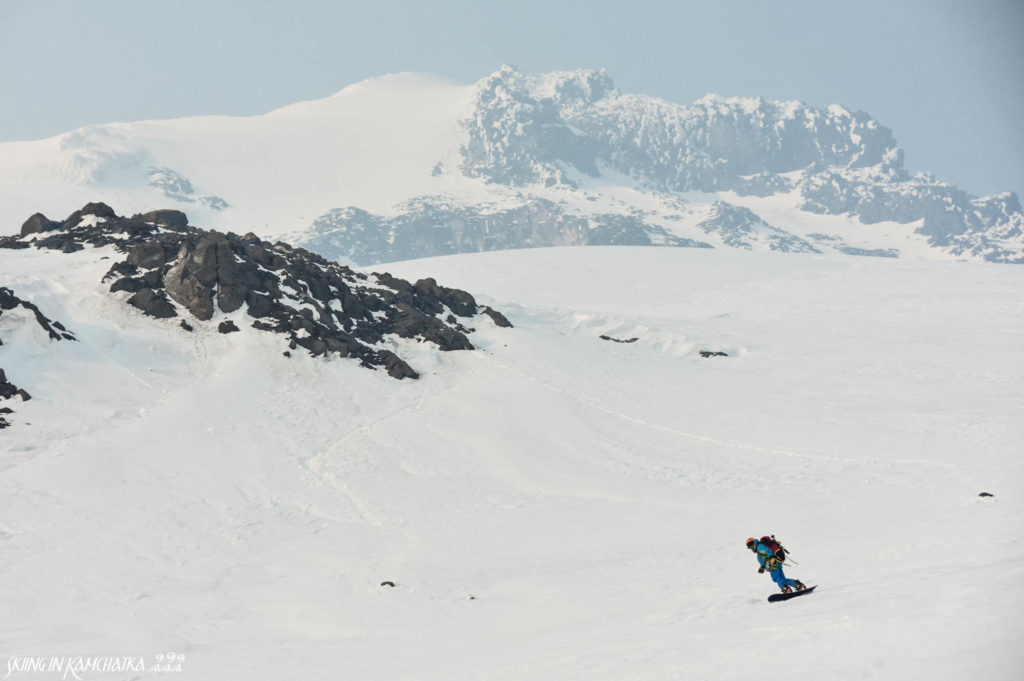 Probably, we should to celebrate this day in the camp, but we just had a fast dinner and went to sleep. In next 1.5 days (instead of 2) we had to come back to the road, with unknown snow conditions and we needed a good rest.

Next day we were fast. Even with pulling the sledge in tundra without snow. 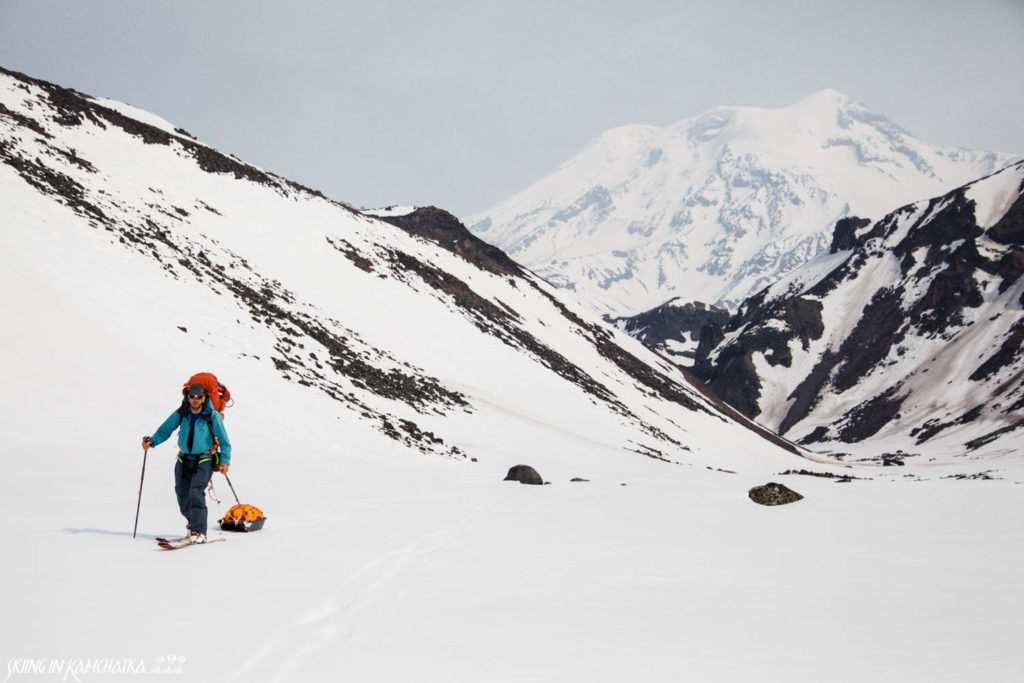 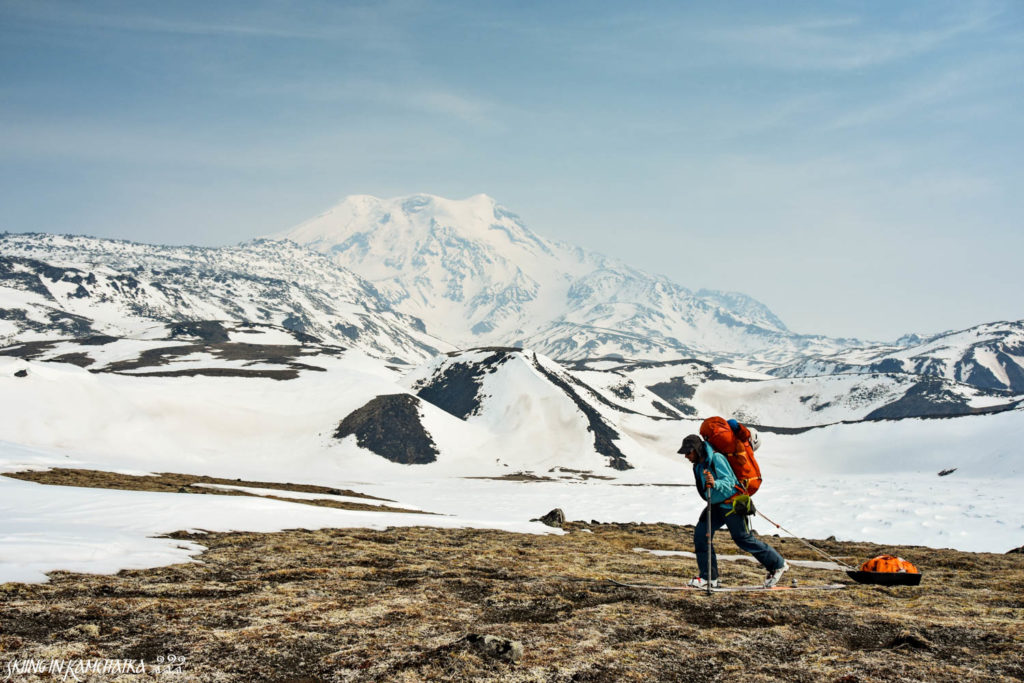 We had a lunch on Ketachan lake, but as soon as we came to the plateau (which was cold and hard during approach) we found our second favourite snow conditions – liquid concrete. Spent some time fighting with it and set up a camp with already familiar idea – wake up early morning and try to go further on a hard surface.

Morning was gorgeous. Not necessary to describe it, just watch. 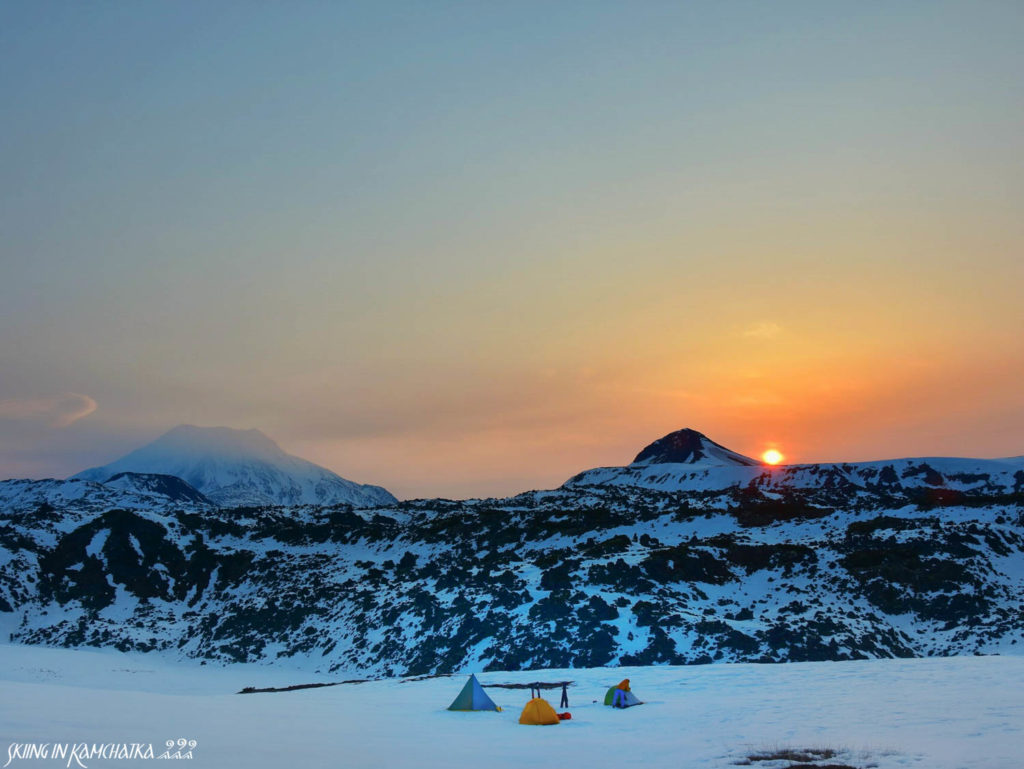 Some wildlife around us on a way back home. 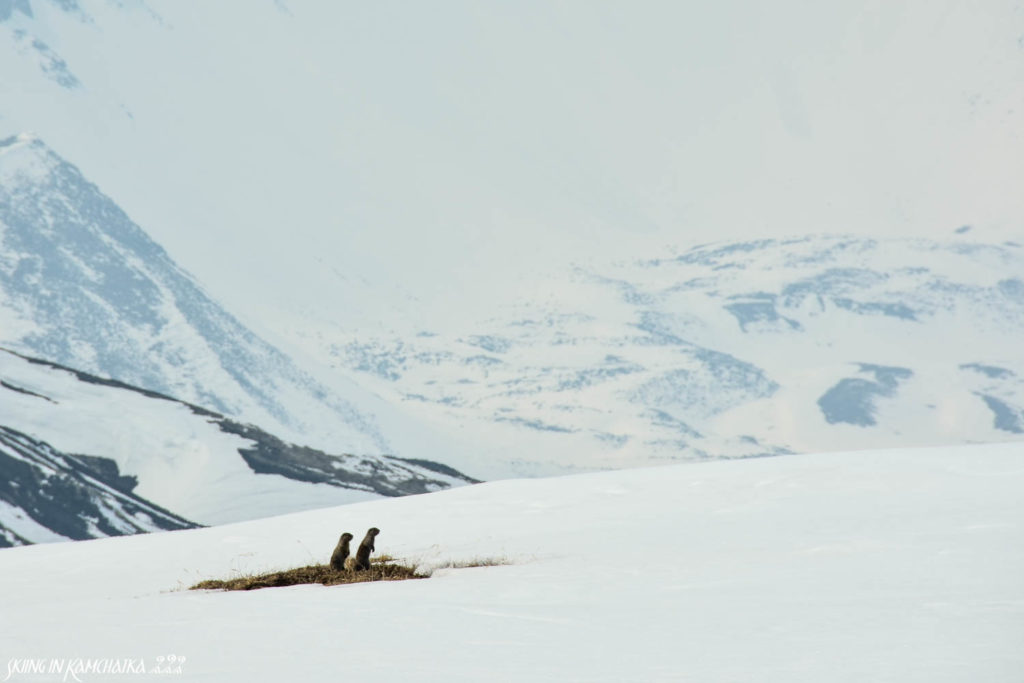 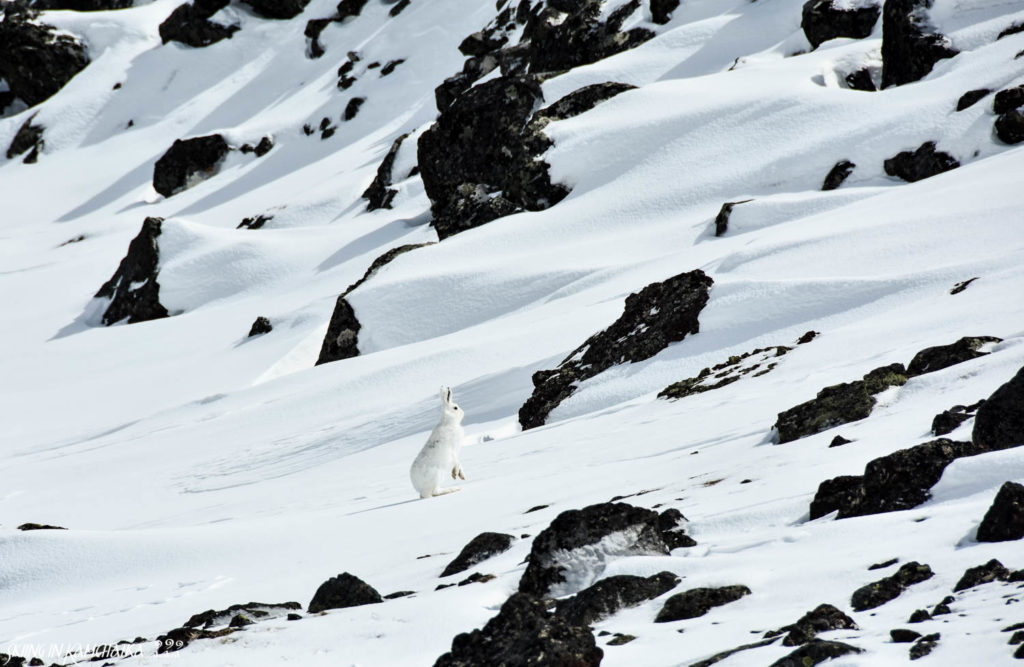 Snow was hard enough until the descent to the valley, and after we had a perfect mix of “no snow” and “liquid concrete snow”. Skiing in bumpy tundra with (still) heavy backpacks, pulling the sledge through the snow in knee-deep trench, we had got all this stuff.  Anyway, we just had to go through it, and we went. Close to the noon we were able to see the road and our car, blinking with windows on a sun. Another hour, and we were loading our stuff and looking back, on the Volcano. 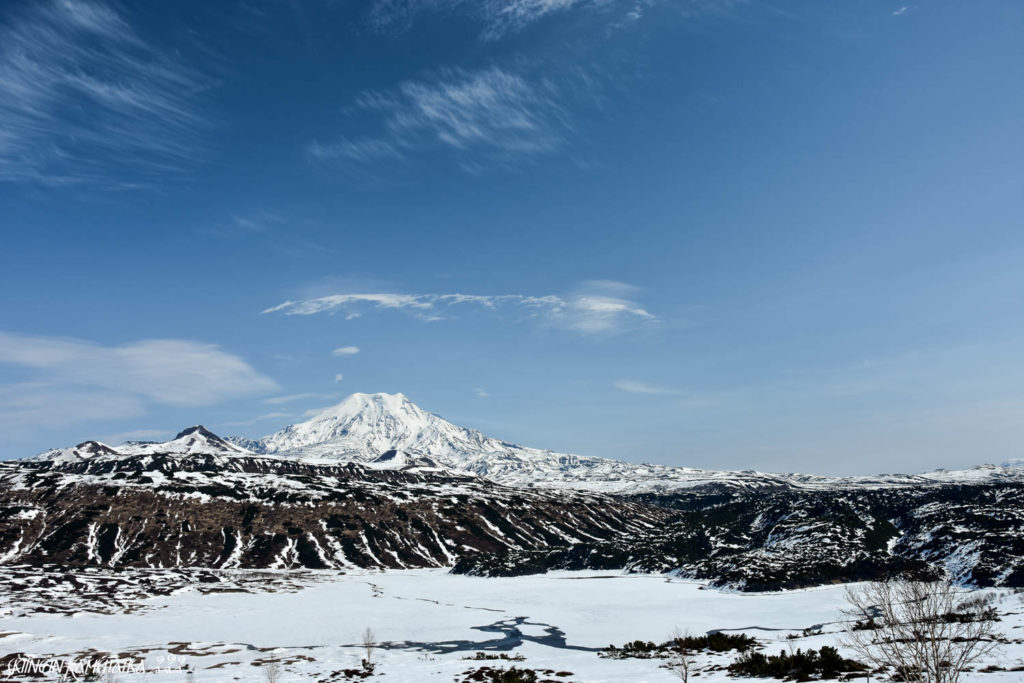 It was around plus 15 (Celsius) on the road, and close to plus 25 in Milkovo village, where we came in few hours. Spring was here, definitely.
But volcanoes around Petropavlovsk were still in the snow, and we’ve spent eight more days skiing them and enjoying great Kamchatka nature. But this is another story.

This story is dedicated to Ralf Tenbrink – one of my mentors in guiding and just a good man, who recently lost his life in a mountaineering accident on Mont Blanc.